Dark comedy thriller, Sublime, is the first of three works currently in development by new writer Sarah Thomas. It plays in April at Tristan Bates Theatre, the central London theatre attached to The Actors Centre. Tristan Bates is well-known for providing a space for new work to be tested, tried and tweaked – something Thomas has taken full advantage on when progressing all three of her plays. Sublime is the first to play a run though and the first full work she has written, after several workshops and rehearsed readings to mould it into a fast-paced, tough-talking production.

I caught up with Thomas over coffee to discuss Sublime, her other works and how these writers’ workshops help to guide and shape a new, emerging writer and influence their career:

Tell me about Sublime. How’s it going?

I finished a draft a couple of months ago, so I’ve stepped away from the action and am letting the director [Ben SantaMaria] do his thing. The cast are incredible so I haven’t had to do much writing on Sublime recently.

It’s been a four-year project – when someone told me it would take a year to write a play, I laughed and thought I’d be able to do it in six months. But it’s changed so many times – I’ve explored different themes and I’ve changed as a person in that time. It’s always a good reflection of you I think, your first play. Although I shouldn’t say too much – it is about thieves after all!

Where did the inspiration for it come about? 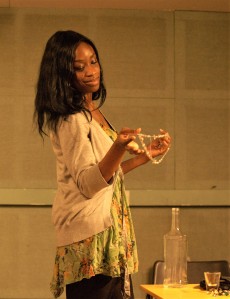 I started with two characters, exactly four years ago, in a writing class. I had created a brother and sister duo in an exercise that a tutor in a writing class gave us. Then, as time has gone by, I’ve played with themes like revenge, property, backstory and came to estrangement as the big emotion. I settled on jewellery thieves, which is very exotic and has been the most fun to research. As a writer, you have to love your characters, so my two are struggling with the world that they live in and tried to overcome that with their underworld activity.

Then in 2015 the Hatton Garden Heist happened, and the Kardashian robbery in Paris in 2016, so my stories were suddenly coming to me. I’ve grounded the show in Hatton Garden, but I saw a news report recently and something that I had made up about Hatton Garden at the time has now been found to be factual! It’s just transpired that only a quarter of the stolen goods has been returned, which is what my characters are looking for at the start of Sublime.

How do you juggle all three at once?

I haven’t touched Sublime since I handed the script over so I’m trying to play with High Seas. I feel quite disorganised – I had a few meetings in France last year about taking it to the Museum of the Resistance. It has three women in it from different resistance movements at roughly the same time – one is a French resistance woman called Lucie Aubrac, who is based in Lyon and had the most amazing war tales in the underground. High Seas is a bit of a fact and fiction blend – the three women never met, were in different movements, now in one place locked away. It’s interesting that my first two plays are about people running away and my third is about people on a prison ship who can’t run away.

Sublime will be on at Tristan Bates in April – a great place for developing works.

Absolutely – I was quite lucky in that I had a Sunday Surgery development session last May where I met a director and my current leading actress, so we did a lot of development within six months. We put a scene on at the Pleasance, but apart from that I haven’t tested the waters too much for this play. Talking to people like Mike Carter helped – he’s a really positive force in writing.

I have a changing relationship with workshops – a few months ago, I swore off them, but they’re so good for networking. If it wasn’t for Sunday Surgery I don’t think Sublime would be at Tristan Bates Theatre – you have so many doors slammed in your face as an unknown writer if you’re not in a workshop, not attached to a theatre, or not having come through a young writers’ programme. I’m not doing many more though – I’ve built up my contacts who I can take advice from. I don’t feel like there’s anything else I can be told about playwriting, everything else has to be discovered.

One piece of advice I would give to anyone looking for a venue – always phone, emails get lost.

So, why writing in the first place?

I’ve always been a bit of a daydreamer. I love stories – I remember being on my bike as a five-year-old cycling to the library. But I didn’t start writing earlier because I didn’t have the discipline and I didn’t have anything to write about. That first idea isn’t difficult, but properly crafting it is. Then I did a class in 2013 and the tutor, Rebecca Lenkiewicz, really opened a door for me to access writing. She taught me the love of writing, which I imagine is very difficult to teach.

I’ve been reading recently about a lot of real people’s lives so a lot of those stick with me, like Neal Cassady. Cassady is quite omnipresent in the 60s American cultural movements – he grew up on the streets with his father in Denver in the 30s. Everyone tried to tame him but he was a wild force that couldn’t be tamed. When I first starting writing Sublime, the male character was that mischievous, Mephistophelean influence, but reading changed it to the female role.

Someone who lives differently to the rest of us; someone who you see as outside of the system; someone who you might see at the beginning as the victim but at the end has an incredible power that we’re not able to access. That’s what interests me – people who don’t live by the rules.

Sublime plays the Tristan Bates Theatre from 4 – 8 April 2017. For more information and to book tickets, visit the website.